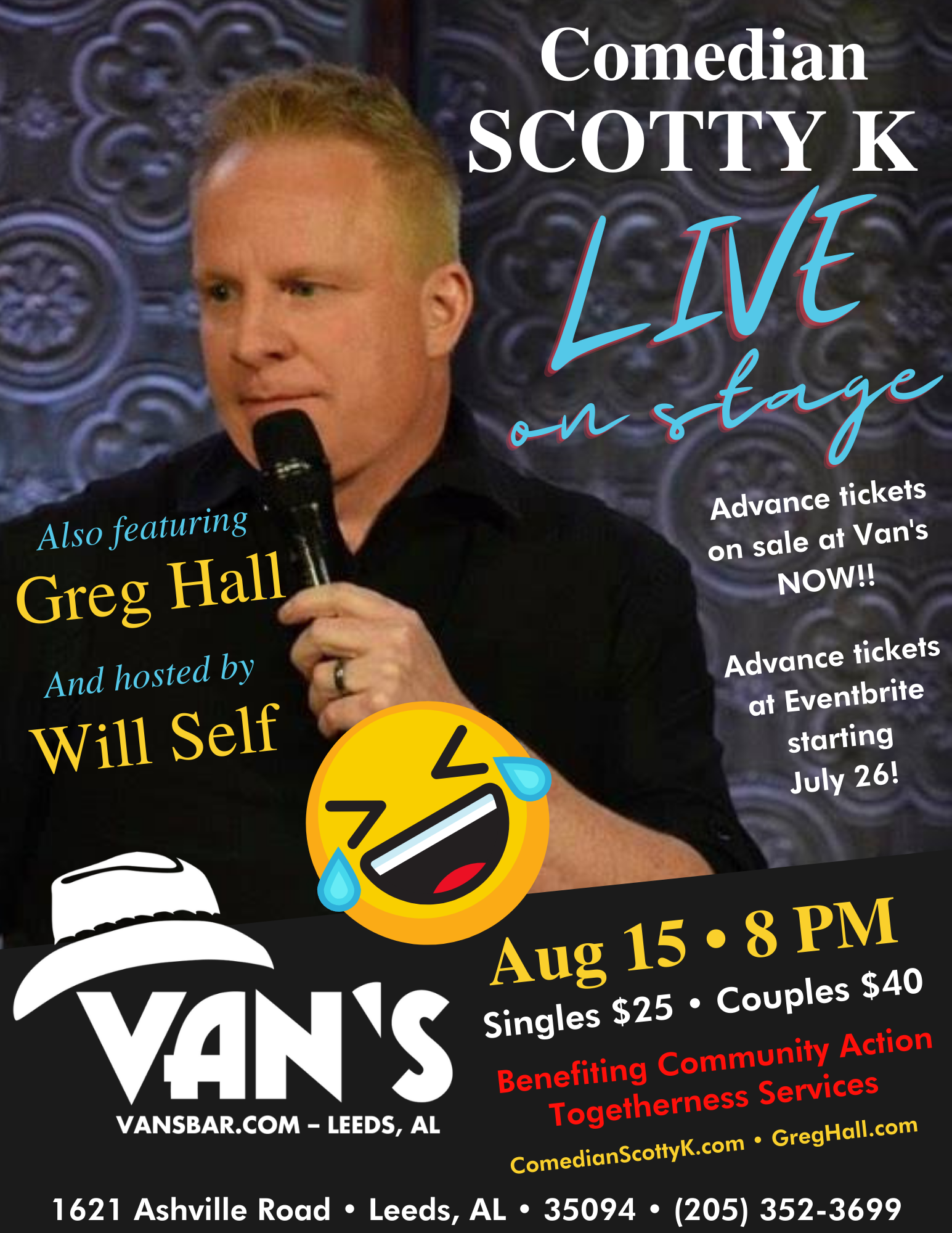 Join us on August 15th starting at 8:00 PM for Comedian Scotty K LIVE on stage at Van’s in Leeds, Alabama. Show hosted by Will Self and also featuring Greg Hall. Tickets are on sale in advance at Van’s now. Singles $25. Couples $40. Advance tickets go on sale at Eventbrite starting July 26th.

Comedian Scotty K is a New York-born and Alabama-raised “preacher’s kid.” His mother was a hard-working nurse and the daughter of a Pennsylvania farmer. His father was a Norwegian immigrant turned Baptist preacher. Being a “PK” gave him and his three siblings a unique upbringing. Scotty lived in a total of six states and attended eight different schools before graduating college. He learned early on that the best way to make friends was to make people laugh. Though very likable, it finally made sense as to why he had been put in “time out” over a million times, when he was finally diagnosed with ADHD after college graduation (something he views as a blessing…not a disability at all). Scotty’s early career was spent counseling teens in drug rehabilitation and group homes, which helped develop his light-hearted perspective on life.

For over a decade now, Scotty has been a headlining comic, winning crowds internationally with his high energy and animated performances. With improv, characterizations, and music, his content is smart, creative, and fun for all audiences – even your momma! Scotty’s material ranges from growing up in the South, to family, relationship dynamics, and cultural differences. His aim is to bring laughter, as well as joy to his audiences (Nehemiah 8:10). At the end of his show, you feel you have been entertained and inspired.

Scotty K has been seen on BET’s Comic View, Comcast Comedy Spotlight, TBS, NBC, colleges, churches, and yes, even The Weather Channel. He has been heard on nationally syndicated radio shows, such as Rick and Bubba, The Bob and Tom Show, and Bob and Sheri. Scotty has shared the stage with stars such as Brian Regan, DL Hughley, Joe Rogan, Chris Tucker, Craig Robinson, Ricky Smiley, and Kevin Pollack.

Greg Hall, guitar in hand, delights audiences nationwide with his songwriting, singing, and humorous observations of life in America. His entertainment career began in Texas as a singer/songwriter after winning a Kennedy Center award for Outstanding Achievement in Musical Composition. “In college I wrote the score for a Garcia Lorca play on an old Gibson Blue Ridge 12 string. The guitar won that award. You could play E minor and sound omnipotent,” he says with a smile. Based in Nashville, Hall headlines comedy venues around the country and for over thirty years has played music in diners, drive-ins, and dives.

Get ready to laugh! Comedians Scotty K and Greg Hall will have you in tears on Sunday, August 15th, starting at 8:00 PM for a hilarious night of stand-up comedy at Van’s in Leeds, Alabama. Singles $25. Couples $40. Tickets are on sale in advance at Van’s now and at Eventbrite starting July 26th. Get ’em before they’re gone!!
For more information about the comedians:
https://www.comedianscottyk.com/
https://greghall.com/
#vansbarleeds #ScottyK #GregHall #comedy #standupcomedy